Paytm will not work until you delete these apps

Paytm will not work until you delete these apps

Some apps take precautions and warn the user of possible fraud or spam before being used, and then there’s Paytm. The popular mobile-first payment service in India has blocked certain applications which could be used to commit fraud or spam on unsuspecting users.

Paytm has now started calling TeamViewer and AnyDesk apps as security risks. This means the apps have been blocked and if they are installed on your smartphone, then it will not work. This was first reported by PiunikaWeb and Android Police. 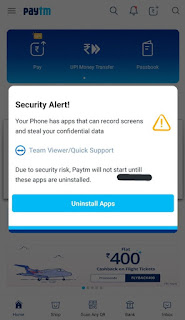 The report has stated that users who either have these remote control applications installed have started seeing this pop up in the Paytm application. The popup states that the apps listed must be deleted. The popup does not go away until the apps have been deleted. A number of users took to Twitter to complain about the extreme security measures. Paytm clarified that it was done to prevent fraud.

The report also stated that TeamViewer is also separately in touch will the wallet service. In the meantime, if you have been affected, Paytm has suggested switching to work profile on your device if you don’t want to delete these apps. However, just deletion is not a viable option…Read more>>